Ok just to be clear:
Then video will autoplay when there some ads! Correct?
by setting autoplay policy "No User Gesture is Required" does this mean video playing should kick in without user intervention?

If not then what is this?

"By changing autoplay policy as suggest, videolab lab is still give same warning as if no changed were made!"

It is a default warning gif/video - Everybody gets it at first launch.

Maybe those honest paying programs could spend more time on website development.
That way their email won't be blocked.
Emails don't travel well from free/$1 webhosting services...
I was an original invitee by google when Gmail was beta.
Never a problem.
Poor email/scripts used by site owners happens all the time.
Copy/Paste coders...


"I also confirm when in videolab (cars), I am force to press arrow on video even with one of the autoply set:
"No User Gesture is Required" or default"

Again... VideoLabs does not have a car channel...

So, Lets talk about VideoLoyalty - Automotive (or more importantly, Discovery Media, as mentioned),
The video will not auto play as expected when there are no ads.
Not a bug. Just close it, try again later...

By changing autoplay policy as suggest, videolab lab is still give same warning as if no changed were made!

I've having some doubts towards google company at large and below are my assumptions:


It seems to me that company doesn't like seeing user earning at all
While they expect user purchasing their junk and when they acting in such manner, this uncalled for!

Until they clear up those bugs and changing on better positive manner, all updates for google are being disable from my system. Enough of that arrogant company

I also confirm when in videolab (cars), I am force to press arrow on video even with one of the autoply set:
"No User Gesture is Required" or default

That got to be bug for sure.

Until bug fix or allowing website to on whitelist to override that policy, my assumption towards google will not change!

where can I sent ticket to report such thing and perhaps, I can suggest them a better setting to override such thing?
When inside videolab - cars area, I see no possible sending a ticket.

Disclaimer: I do not use Google's Chrome Browser...

However, Heads Up to Members completing Video Campaigns.


How to get autoplay with new Chrome changes

The new Chrome browser is pausing autoplay with sound, which will impact user ability to watch commercials.

1. Change your preferences to turn on autoplay: chrome://flags/#autoplay-policy


2. Increase your Media Engagement Index (MEI) for all BuzzTV sites, EarnHoney, and any DiscoveryMedia sites.
The MEI measures an individual's propensity to consume media on a site. Chrome's current approach is a ratio of visits to significant media playback events per origin:


From that, Chrome calculates a media engagement score which is highest on sites where media is played on a regular basis. When it is high enough, media playback is allowed to autoplay on desktop only.

User's MEI is available at the chrome://media-engagement internal page. It only takes a few clicks / videos watched to have a high MEI score.


You may want to wait for confirmation from admin...

Since policy change for Chrome started in January, Official change/update can be any day...

Other GPT/Reward sites have notices posted...


... Or get rid of Chrome Browser. Google already knows enough about you...

By changing autoplay as suggested, what will this accomplish?

By just showing "no surveys available" is best than other notes as other survey router do as yoursurveys and so on!

Ampario has few surveys qualifying surveys but when no are in then one is being reached!
I personally think ampario need blocking that other domain name!

I read Valerie note on dead-end surveys which is probably true but I also samplecube needs checking and remove those few time!!

yeah.... i agree its kinda a 'bot'. i've several type of survey routers too ranging from 0.50-0.80 but each time i attempted it, most likely will be 'Sorry, no surveys available"

I came across this many time and it a server problem!

rpdesign we don't receive a thing even server problem! That's about it!

It's because there is not any surveys for you at that time.


this would provide a much clearer problem they are facing past 2 weeks :- 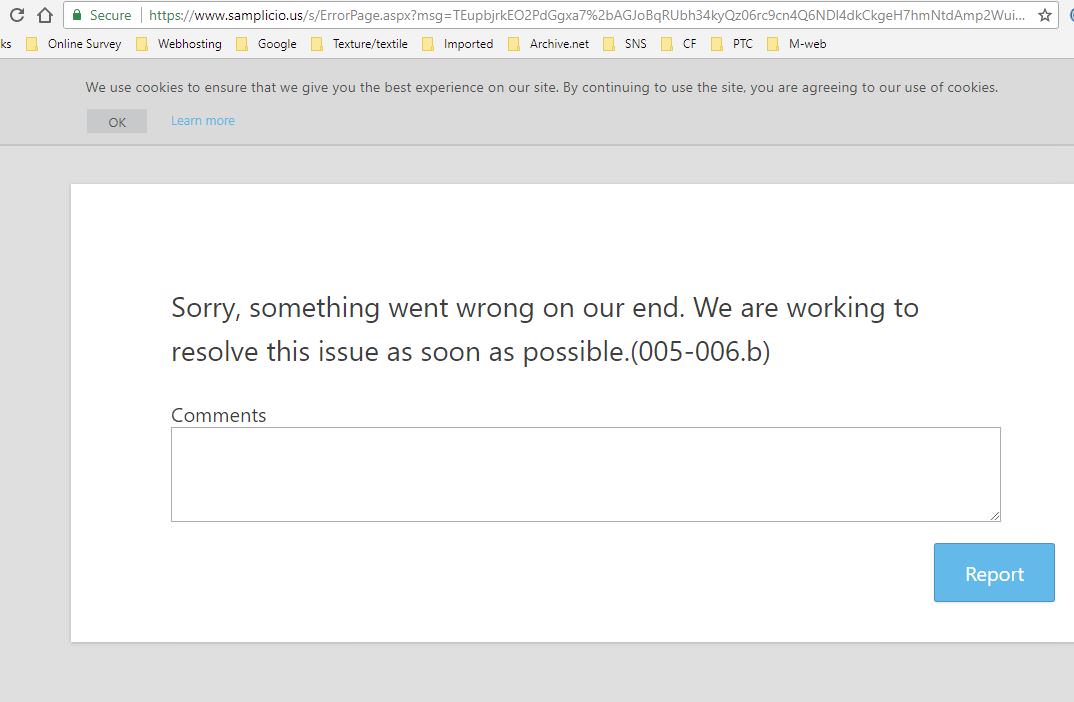 I think I provided an easiest example on bot and it strange you didn't understood that Valerie!

Bot:
When after seeing all those same value on samplecube, I suspected they must be sending those so called qualify surveys on clixsense instantly!

If the above example isn't consider as bot, what is then?

Again, you might say, "although they have have same value, this doesn't they leads same router"

When clicking those 10 samplecube survey, you wouldn't believe amount of time it reached ampario and opinionshere router which lead one of the following

That's all I am saying!

Ok, what do mean by saying server changes?

As previously say about receiving cash to point converted into cash is fair to all.

In fact, advertisers actually pay having their junk seen and it make sense to receive some back at this point as to be a replacement of PTC.

If my country never get targeted, what good is this that!

When user tries completing those surveys which lead to same company is ignoring!
Let says there 10 possible sample cube value at $.60 each per day, when trying to complete those survey which in reality lead to be disqualify each, would this ignoring?

Actually Val, I am not talking about email but only those possible surveys icon on survey area on clixsense!

In fact, Assume several of sample cube that are so called available value at $0.60 each but leads to same survey company! When several of those show up on same area, it seems to be some kind of bot!

I agree with kiips reward but it seem only the US reaping from in which I think some changes are in order to be fair to all, like when clicking on those spam survey or any giving link to receive payment like $0.005 to $0.001 or receiving points convertible into cash.

I did made that suggestion in feature request!

Are those survey notifications somme kind of a BOT?
I noted several survey valued at $0.60 leads go same surev each and this quite ignoring when kiips rewards isn't rewarding at all!

Well, if you actually got "You did not qualified for the survey" then now you have it!

locate pollfish website and use they contact page.
Make sure they get your clixsense ID and screenshot

I know pollfish was great in tern of survey but it rare get survey even US and CAN and UK. Most time they sent disqualified surveys in which I gave them up entirely

Yesterday I finished 3 surveys from Pollfish, did not got the payment for any. When you are waiting for payment confirmation you got `You did not qualified for the survey`.
Three surveys yesterday!
Today two surveys, same happens. Contacted Clixsense, but as always so much of nonsense.
Screenshot and we are sorry, etc .. Means, we do not care and have a nice day.

Anybody else had the same problem with Polfish?

You can request check.

You said your mini computer has hdmi ports and a display port. It must there must located somewhere on that device!

If not then you going through documents on product or specs on web!

I know VGA TO HDMI cables are available on amazon!

I can't last two question as I don't that mini computer!

I hope this help and if no then that's all I can do!

I year ago I purchased a monitor and a mini computer. Today I decided to hook it up.

Unpacked everything and no problem hooking things up but then I noticed all I had was
an included VGA cable..............the kind that has the screws on each side to screw in.

So lame since the mini computer does not have that type of display port.


The mini computer has hdmi ports and a display port.

What does the end of an d display port look like?
And do I need a display to display cable or a display to hdmi cable?

PS little paper looks like it says E1916H and several other numbers for the cable.
So lame because it displays it as if included.

3 reversals is already calculated with earnings
Wow another great year!

I know one interesting works to do in the world which requires some and no effort in:


My earning is proof of this and I'm lot members will agree on this!

I wouldn't call that work...

In rounding to nearest cent, including task bonus and what you'll see on following image, brought me $652.39 in 2016 It's been a great year and this will be even better!

I also need to point out all amounts you all the above doesn't even include any referrals earning!

I know other websites has this but it would be a waste for money and time in using this!

Clixsense and us are here earning money and not for chatting!

No function that allows this! Instead we're allow posting message to our referrals.
Some referral have their email address private

Simply click on active number of referrals, then at right of screen we can post message there! Happy Canada day Canadians and for the rest that live here!

This one after extending my membership: