I have a have question for excel!

router name is in column B
amount paid in column D

Before going there, below formula works great without filtering or sorting data and was able selecting an entire colum as (B:B) and correctly display correct count per router.

) and without sorting or filtering data

I sure like to know ways adding such inside that formula

Ya, me I agree on mandatory vaccination and somewhat agree on freedom to choose as long isn't at expenses of vaccinated!

Even if we have 1,2 or 3 shots, what I don't like is we have still wear those masks and those who refuse taking those shots act unfairly!

All I can think about that miracle vaccine is bullet in our head , mandatory for all on planet

I do agree with mandatory vaccination laws considering the exceptional circumstances we are in - BUT each person should have the freedom to choose which vaccine they want, no specific vaccine should be forced, as long as it is an effective vaccine - and no person with medical conditions putting them at high risk when getting vaccine should be forced to, these should be exempt. If the US army vaccine will be mandatory it will likely be in the US only, a miracle vaccine coming out under a Democrat Preisdency, I am in total disbelief - this is very suspicious to say the least.

Quote:
Military vaccine ? How come they know so much about this virus ?


Indeed, it is very strange - unless they are the ones who created it - It's like an anti-virus software company creating all the virus and then releasing the fixes shortly after. Same thing here. Will this vaccine make you submissive to the new one world order, the Illuminati organisations HQ'ed in America, lead by Tom Cruise ?

I bet you they were experimenting this vaccine on the aliens they kidnapped from Roswell, maybe the US army made a deal with the aliens, a miracle vaccine in exchange for information about humans here.

I hope that Americans will not be brainwashed with this fluff - the virus will ease on its own, it will eventually become endemic like the Flu, Omicron seems to be an indication that mutations are heading this way, so eventually waves will be much shorter - of course the army will then take credit that it was their vaccine, but it was not that, it was just time.........I'm not saying we should trust Pfizer or Moderna more, big pharmaceuticals that were guilty of covering up information in the past - but between Pfizer/Moderna and US government, guess who I trust most - that's like asking to vote for 2 s***e politicians, you must choose the less of the 2 s****s

So far, there some improvements:

We don't get daily bonus for all the above however!

I hope there will be more surveys in the future, and I hope the website can improve its revenue in other ways

You probably recall when I report a biggest earning over a month ago:

Back I went through 9 surveys in which value per survey were smaller but today just after completing 3 surveys and few offers, I earned following: 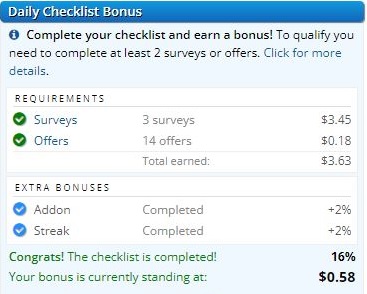 Since you're new here, all I can tell you is be:

When surveys are available to you is be consistent towards answers.
Survey taking is really a skill.

Important don't expect earning that much as I did.
I sure didn't expect it also.

On average, I manage completing between 1 and 3 surveys per day when available.
I that gets you started. Several members can provide in debt throughout forum

I want to earn also as hown? Like here as a single mom

Those 19 offers came from theorem reach and CPX research

I couldn't believe earning I got today!

Crazy! Take a look below PIC, it's rare and I know! 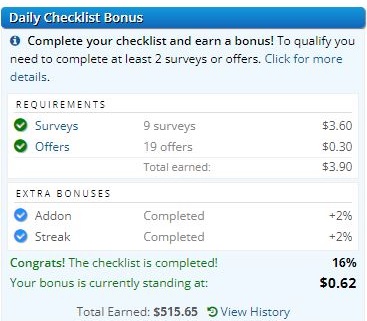 Thank you Mark for responding here and via email as well.

No harm done I assure you.

At times, we can never know can we! LOL

I guess we can lock that as problem is solved

I received a strange email from ysense saying following:

You've got $98.63 in your ySense account which is enough to cashout for your next gift card!

I knew my account balance wasn't that high and my suspicion was correct,

I wish that balance was in my account though! lol


Thanks for raising this.

I can confirm this is a genuine email from ySense, although something isn't working quite right with the dynamic balance total field. I've passed this on to our email team to review and rectify. Apologies for any inconvenience caused.

Since investigations between South African and china are in progress, it will interest to see where those vaccines come from! Not being against China, it wouldn't surprise me those fake things could came from them! I sure hope not!

I received a strange email from ysense saying following:

You've got $98.63 in your ySense account which is enough to cashout for your next gift card!

I knew my account balance wasn't that high and my suspicion was correct,

I wish that balance was in my account though! lol

The witch hunt is over - Trump is acquitted AGAIN! » Post #4

Not so sure about special election of 2021 due to all falsehood created.

Unless current president get impeached with proof, that's only time I can see that election taking place!

He is back and democrats pants are full today , there will be ask for urgent special election at the end of 2021

When they purchased stand alone programs, first goal is to improve them.
So far that goal wasn't even accomplished. (See belows to see those program)

2) Mypoints (I was also a member before), listed on stock market and got delisted when prodege got in and became less popular

3) clixsense became ysense
Yes, ysense is popular towards lack of earring and best survey routers being removed. We knew clixsense was better than that.

Yes, it make sense demanding prodege to clean their act

Horrible month here too, low 2 digit, little under $50, worst month in over a year! YET I earned effortlessly $100 on another site that I joined since January. In 2020 on ySense earned more than double in January. It's not a question of issues / bugs for some, for some reason this site has received FAR less surveys / quality surveys since tasks were removed....and most of the invites now are screenouts and off quota. It's not only members who are suffering but people who have REFERRALS and were earning from their referrals - or people who spent money to get referrals and now find themselves with considerably reduced income - not everyone is as patient as some of the active users here, people leave and go elsewhere.......... as to people who think of leaving here, well my best advice, by experience, never close doors, because situation can change at any time, when sometimes it is better on the other side, you can get a complete change of situation - which is why it's good to work on multiple sites, it's a lot of management and headache, but there comes a time when one has no choice - though I never expected such a HUGE difference in earnings on ySense so far this year, truly disappointed, as many are here. such a HUGE bloody difference compared to past few months here, is it a coincidence that tasks disappear and things go down like that, because last month earned $184 here, - one thing I noticed that offer walls are lowering their already disgustingly low rates, I guess this is out of the control of ySense, as this is seen everywhere else, but where Prodege CAN make a bloody difference, is to offer more DIRECT routers just like competition, instead of giving us rubbish offerwalls that offer ridiculously low surveys - those SAME direct routers can pay as much as 10 times more sometimes. Pollfish, the only way to complete those here is through RU, at a 6 cents, this is ridiculous, other sites carrying PF, pay 20-30 cents. Some sites also feasture Toluna's direct router and pay a fixed 90 cents to $1 per pop. Some sites carry the direct SSI / OpinionWorld router.....why can't this site be competitive. ClixSense was competitive - sorry to say but Prodege kinda destroyed this part of CS's legacy along the way, albeit not all of it, which is why I think the site has potential, but consistency is lacking. CS had the ability to offer us direct routers, this is the main area lacking here, all I can hope for is that this situation changes.

To recap Jan 2020:
Amount of Survey were 11, plus no survey offers and earnings from referrals, earnings back then were: 14.37

Jan 2021:
Survey amount were 17 plus no survey offers, including amount earned from referrals, earnings this month was: $15.54
At this month is better than a year ago

Although, I am not from India, in term of auto transfer to bank account, seems to apply to Paypal Business account holders but that is optional.

That news item have to be fake but I would contact Paypal for clarification. Is there setting that allows to auto transfer to bank account in your profile, they would know for sure.

On my account I see no setting on that.

I don't know it is fake

Yesterday in economic times news this was given about notes

It has nothing to do with memories shortage but yes, it could be true Mr. Trump done some good but when He done some harm, should He not pay for it as criminals do! Imaging causing criminals not paying the wrong they did based on good they done!

We are talking about national security

I remember Kim Campbell (one of PC leader Canada) making of Liberal leader and did rather questionable action. She got spoken understandably harsh and was force to resign! Most of PC party back then turned against her!

If you new phone isn't registered on Paypal, is not possible fo them validate that.

However there two possible solutions:

I came through following via Wikihow:

- I cannot find a link where I can contact Paypal without logging in, when this is my problem. Go to paypal.com. Scroll to the bottom and click "Help & Contact." Click "Call customer support." Click "Call as guest." There will be a phone number.

Now will the above help?

I have all my details of PayPal account Date Of Birth, Address,phone number and bank account number. So if I call from my new number then they help me?

It wasn't that great this year.

Major difference and perhaps this due to outbreak and those surveys that were not credited.