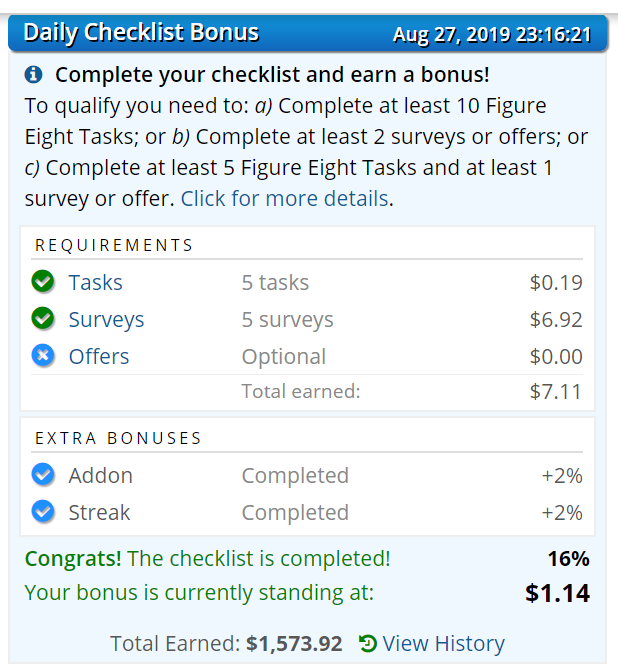 Wow , huge again , looks like surveys are back in Canada, congrats

Wow , huge again , looks like surveys are back in Canada, congrats


WELL too early to say for sure, 2nd good day of whole month so we'll see - Even on CS it was difficult last few months, lucky to get $1-$3 most days, those big days are rare though, so we'll see - I don't expect a 3rd day like that anyway, anything in August is fine, I even said $0 would be fine, August = write off month

Great! Now that's two days in a row you had good earnings! All this after you generated a lot of negativity in the forum? Alright, moving on...

I'm moving to Canada, it's clear. In France we do not have much luck. You are royal and you imagine more than $ 1500 just a daily bonus. Respect.

Great! Now that's two days in a row you had good earnings! All this after you generated a lot of negativity in the forum? Alright, moving on...


Just because I post 2 days in a row high earnings means nothing, the earnings were low the other days of the month, that's ok for now. As far as negativity, come on, there were others that generated worse, some calling site a scam, robbers, etc, and other nasty names, it's funny how these people don,t get attacked, and how come when I make a negative comment I get attacked by the very same people who made vicious comments in the old days. Anyhow, I've been reporting bugs, I've been backing up my complaints with solid arguments and valid ones whilst some were preaching basically - I'm only posting those success stories to prove a point - No matter if you post something positive or negative there will always be someone attacking you and berating you it is in their nature - you could have done 1 million positive things in your life, and even if you do 10 negative things you will be called out and burned at the stake, they will not look at the good things you did. Just because I posted big numbers does not mean this is what I earn daily, and I know for a fact some people here are earning 10 times that in one day with tasks alone, so it IS possible to earn big in one day, I'm not doing it consistently though, but anyhow.

The site would have avoided all this negativity with better communication - it's to a point where now e are reporting bugs and not hearing back, not knowing if they even READ our bug. They should have avoided the forum for bug reporting and used a bug tracking website, it's a better organised way of bug reporting, you can know if a bug has been assigned, read and the status - just to know you are acknowledged and not ignored, it would have lessened the frustration and negativity.

I am not on trial here, if I want to say some negative things I will not let some preachers and attackers silence my privilege to express my opinions as many are doing the same, and back up my arguments with valid points,I have left the forum for a long break in the past to focus on other projects, when I came back it was CHAOS, fights, negativity, flaming, etc, I have screenshot and links of past posts to prove it because there are people who called the site a SCAM, FRAUD and wished harm upon company, IT'S FUNNY how nobody called out the poster, no mod, no admin, no bloody nothing. yet when I make a negative comment, I get attacked from all over.
Last edited by Darkstar2 » Wed Aug 28, 2019 16:32 » edited 1 time in total