I already disabled it

Very bad that chat has been introduced again it will only be an nuisance there should have been an option to disable chat so that members who dont want it can remove it. Please don't send me chat requests I have switched it off!

I was just wondering what Croatians look like just to get an general idea what you may look like,well men have good physic and women are very beautiful a monkey does not fit those characteristics where did the idea of you being one jump into you

? Did you understand what you yourself have posted

Yes, we are living in the end of time.

The Euphrates river is drying up. It's the 6th bowl.

Agree with suraraj we have to first take knowledge and then post.fake information posting is not good.

Whose Truth ?
Trust me , 7 billion people . 7 billion truths
There is only one truth in this world , my , but all 7 billion say same , my

Hope your information is not like some members wife in Ysence

The news about the variants is everywhere it cannot be denied but social media is a source of fake news anyone can even spread misleading content especially Facebook is a virus,even Google is getting bad I use YouTube to watch only Music videos I have changed settings so that I don't want anything else in my feed but they still keep putting fake videos in my feed,because people watch a lot of these fake videos and are influenced by it,when I don't want to see all the crap why is it still in my feed thats because even YouTube does not control fake content,main problem is how to stop fake content not the variant news,people are not intelligent enough to understand what is true or false,Youtube shows videos like China to launch missile attacks over Australia one day Tasman1 will find an Chinese missile outside his house

Nothing no one knows how many variants exist and what are the symptoms,in India even doctors are dying of Covid19 in the state of UP 37,Bihar 78,they are Frontline workers they were the first ones to be vaccinated then how did they die

I hope that you are doing fine in these hard times. I am not so good in words but I MUST share my impression about ySense and its affiliate program!

I am member of this panel from 2011 and for these 10 years being here and I never been happier then now. Why?
In last month, I really saw real potential of this website. I live in 3rd world country and surveys are not quite usual here on Balkans. Maybe we have around 5 per month. I know that I cant earn only for doing surveys so in last couple of years I promoting ySense all over the web. And you know what, after so many years of struggling with around 50$ from commission each month I can say that finally I started to earn good amount of money here!

Look on this statistic for previous 30 days! 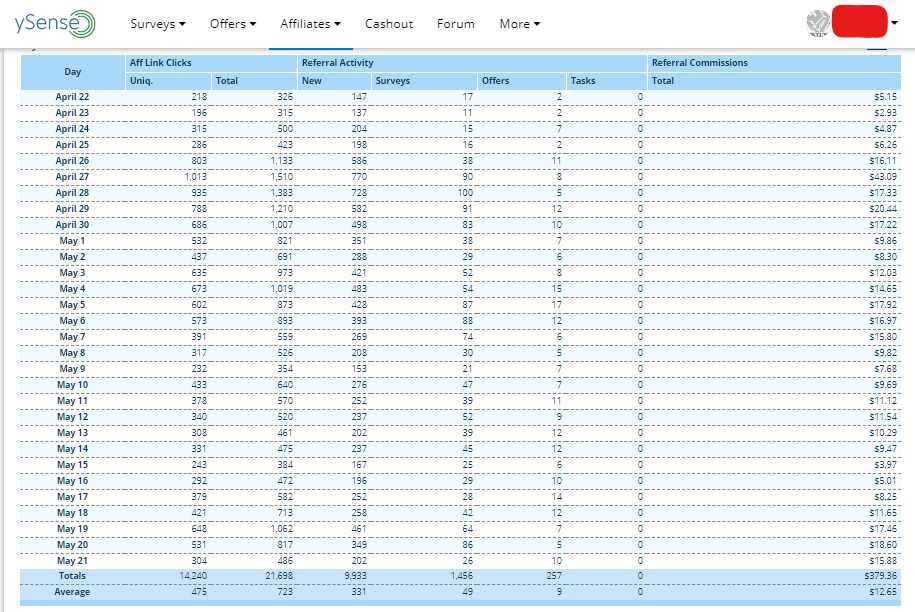 And yes, for all new members here - ySense is really LEGIT websites that pay attention for their users needs: Mark (admin) ,for example, helps me when my account was attacked by phishers and spammers (Big Thanks again), they always paid what you earned (My withdraw of 50$ and 100$ are finished in 2-3 business days), they resolve any problem if you had...

LONG LIVE ySense and THANK YOU!

P.S. Mark, if you read this post, could you take a view into this bug or whatever it is? I noticed that my number of referrals are drastically dropped out in referral list (over 12.000) but my regular stats shows their real number! In past, number of referrals on list was bigger then number is stats by 300 or 400, I think. Thanks!

In India we still have bank branches all over the place and will remain because India is still 80% cash more than 85% still use cash many people survive on unaccounted money,many poor people dont have a bank account they dont earn anything what will they do with a bank they keep whatever cash they have athome,in India still nothing works properly netbanking is there but mostly its down or does not work properly one has to go to a bank branch,many apps are useless they can excess your personal information from your device your contacts location what you do on the net,why do you need apps that steal your information and give you nothing one should use the web for most things only pre-installed apps you can keep because they are mostly developed by the phone manufacturer you can disable apps you dont need through settings so that they dont run in the background and consume data and slow down your device you can install a good web browser in addition to what is pre-installed and couple of productivity apps just to keep you device running at the right speed your device will never crash or freeze if your software is updated regularly