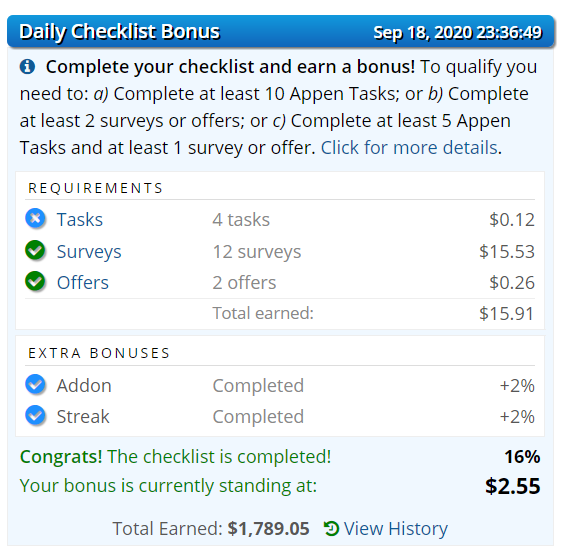 Unusual day today, I usually spend the first half of my day out of the house, to enjoy outdoors, before the shit storm this winter and work on surveys and site usually after dinner. Could not go through all invites, those big days are rare though, but I'll take it. This month has been good so far just as predicted - BUT I am cautious, in 2019 I had great months, then followed by 8-10 months horrible months. ALL interesting surveys today, reasonable (not too long).

Please answer ... Are you Bill Gates or just trying to be richest person on planet

Please answer ... Are you Bill Gates or just trying to be richest person on planet

Unfortunately, it is a far cry from the $300-$500 a month I earned on CS in the 2014-2017 years, and $1500 a month freelancing (short lived due to 3 corrupt c**ts ! who destroyed my hard work!) - so yeah I'm not going to see those numbers in a while, and probably not at all - it's hard to detach from the baseline, so my new baseline and goal is >$100. Appen is garbage, no tasks other than the PTC daily task, that's it, so all the burden now on surveys.
One thing I am VERY disappointed is that my favourite router OW has decided to INSULT all their survey panelists by lowering the rates - so I don't bother completing OW anymore - This site is still waiting on answers from SSI about what the F is going on because apparently this is a OW issue / decision. I'm WORRIED that the latest OW scandal will spill over to other routers because some routers outsource from the company that operates OW. It's only possible to have good days like this when there are higher paid surveys - but I am worried that soon all surveys here will be 5-10 cents like on the crummy offer walls. I hope it doesn't come to that.

@Darkstar2 Wondering what is your lifetime earning on this site?? Hopefully i can reach your level. The most i can get is $25 a month only. My goal is $100. Any great tips?

@Darkstar2 Wondering what is your lifetime earning on this site?? Hopefully i can reach your level. The most i can get is $25 a month only. My goal is $100. Any great tips?


My lifetime earnings including ClixSense is above $16k, in my case what helped a lot is joining EARLY. I joined in late 2011, before CS even added surveys and tasks, so no saturation yet, then eventually surveys and tasks were added - at the time surveys were limited, no ore than $40-$60 a month. In my case a good portion of earnings were from TASKS at the time, those were glory years of tasks, many were well paid AND recurring DAILY, so you could snag a couple of dollars here and there on these tasks in the worst of days. One of these tasks eventually came along which allowed to earn 2 digits day after day. Eventually this glory faded - too many new people joining, hammering / refreshing, sharing IDs, exploiting / cheating, etc, then eventually many of those good / recurring authors left the platform (I know because I did work for half a dozen of them, outside the site, one of them I worked for directly as a freelancer !).

Your question is a difficult one - of course joining any opportunity EARLY before saturation is ideal - now tasks are run by Appen, through an acquisition which means a million new workers added to the crowd, YET with little work, because of the move to automation / AI over the years...... So now the burden of my earnings here are surveys alone with only 1 recurring task daily which brings em 12 cents if lucky

TIPS ? Unfortunately can't add ore than what was stated - earnings here are dependent on what we receive, we have no control over the tasks or surveys we get - There are several ways to earn - You can take the referral route, and if you have the know-how, time and patience, build a downline of referrals you can earn from through their work - getting referrals is not something that is difficult if you know where to advertise - The most difficult part is getting long term ACTIVE referrals considering the current situation......... I have relied strictly on own work for my earnings, only about $230 in referral commissions through mostly 1 voluntary referral but that's it.

I've had 8-10 horrible months on THIS site, due to lack of routers and lack of invites, there was nothing I could do about this. The only thing to do is remember the magic 3 letter word - TRY. You cannot control what's available, BUT you must be sure that you are not missing anything - you must be aware of what's out there, periodically checking tasks, offers and surveys to try everything that is out there, even if most of what you will see is not so good, sometimes something good pops up. Another big thing in all GPT sites, surveys are targeted. The companies and clients running surveys are based on the U.S. for the most part (partners are all U.S, very few international publishers), so your country, age, gender, employment, income and general interests will severely influence the surveys you get and the amount of them you receive........... Unfortunately, you have no control over that - Tier 1 countries get the most of everything, in theory, of course providing they are in the right profile, then followed by other Tier 1 countries, again, providing other conditions are met. Higher tier countries are very limited in the amount of surveys, though some survey providers DO have inventory for international members, but in a very limited capacity. Some countries are much less fortunate and do not get any surveys or little - the only thing you can do is look around, everywhere, build some nerves of heavy steel (you will need that, trust me

) and patience. For international members above Tier1, perhaps the next best bet is tasks and direct referrals. If you have done everything you CAN do, and checked everything, every day, then there is not much else that can be done, you've done your best.

My personal strategy with surveys is to work on the best routers FIRST and higher aid first, because many surveys are SHARED across networks / routers at different rates, most of the time lower, so I start with the higher paid AND best routers first. I avoid surveys on OFFER WALLS as they are very low paid and these surveys can be found on regular routers - though I use offers whenever I am stuck with the daily checklist bonus. For international, offers might be a good thing due to lack of regular surveys - BUT the rates are very low !

For surveys, each individual router builds a profile about you over time and stores it internally - always be CONSISTENT and HONEST with your answers - routers remember a lot of the data you provide, and this can influence the surveys you receive - so you must be sure to remain consistent to avoid quality strikes from those routers,
which could exclude you from some publishers (3rd party) or blocked from surveys.

For the rest, it is all based on chance - it's a lottery really ......... But at the end of the day (or night) if you can answer ALL the following question with a YES, it means you have done what needs to be done.

During the glory days of CS I worked full time so all my efforts on the site were evening time, and limited, and my earnings were consistently above $200 a month, mostly $300-$500 A MONTH during those times - Unfortunately, with saturation, authors leaving and difficult times, it declined year after year, this is inevitable, demand is increasing exponentially, whilst offer is declining exponentially it is very frustrating but nothing much we can members can do other than requesting routers and more inventory if possible and keep on checking and checking and checking until we lose our mind

Unusual day today, I usually spend the first half of my day out of the house, to enjoy outdoors, before the shit storm this winter and work on surveys and site usually after dinner. Could not go through all invites, those big days are rare though, but I'll take it. This month has been good so far just as predicted - BUT I am cautious, in 2019 I had great months, then followed by 8-10 months horrible months. ALL interesting surveys today, reasonable (not too long).